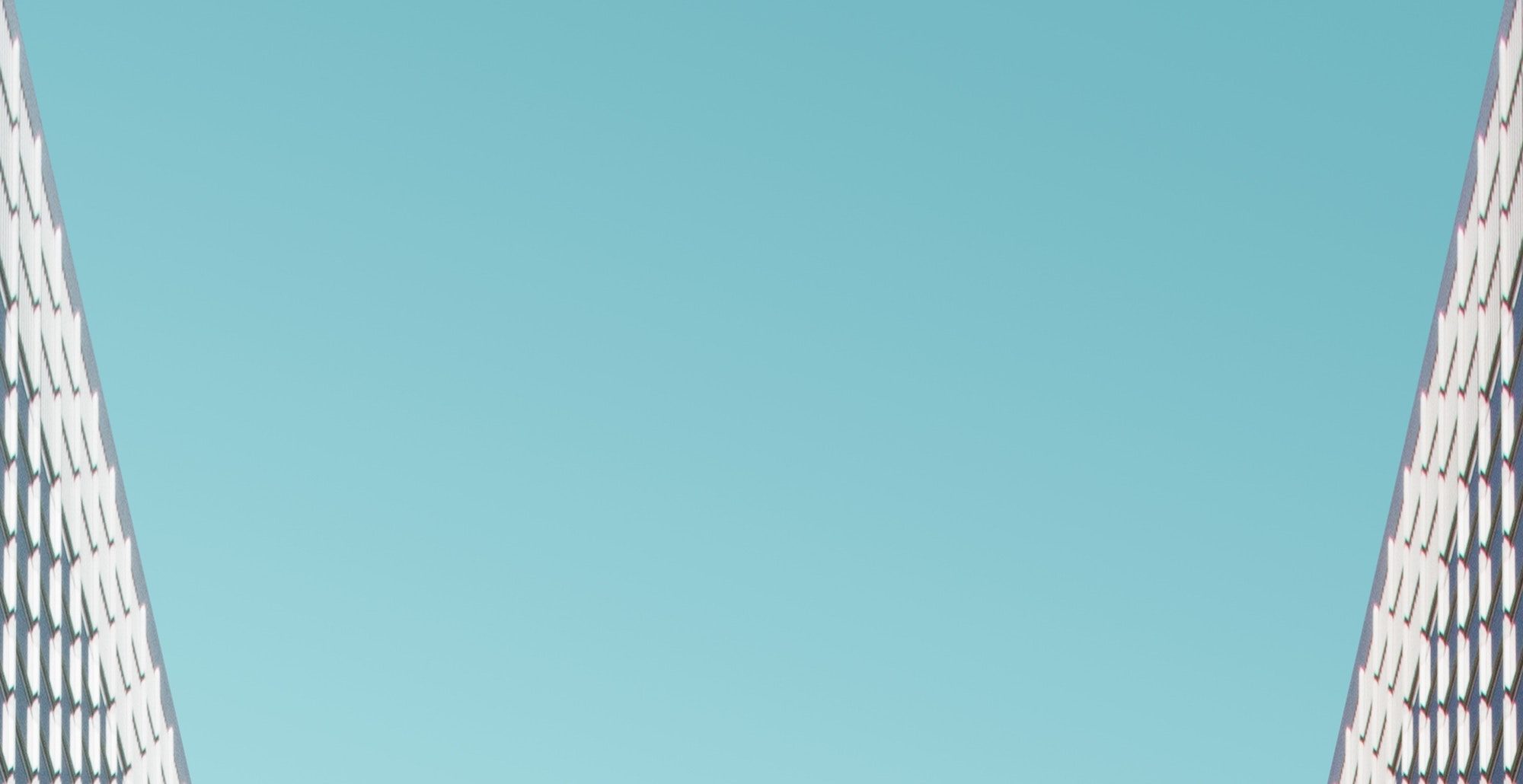 The third quarter witnessed continued broad strength in global financial markets. Major equity and fixed income indices generated positive returns, supported by many of the same factors: synchronized global growth, robust corporate earnings, and generally accommodative central bank policies that propelled them higher in the first half of the year. There was no shortage of negative news during the quarter, from rising tensions with North Korea, to political discord in Washington D.C., to damaging hurricanes and cyberattacks. However, despite the daily headlines, investors focused on the underlying strength of the global economy and corporate fundamentals.

Once again this quarter, the market’s positive returns were accompanied by exceptionally low volatility across asset classes. Following months of strong returns and docile markets, we believe a dose of caution is warranted. Our outlook for the global economy and corporate earnings remains positive, but many areas of the financial markets appear fully valued. Moreover, global liquidity has likely peaked, as several major central banks have either started normalizing policy or are poised to do so. Given full valuations and decreasing liquidity, we believe that any near-term rises in asset prices will likely be more subdued than the increases we have seen over the past 12 months. It is reasonable to assume that volatility will increase from what we consider to be unsustainably low levels. As a result, we have been rebalancing portfolios to reflect a more conservative investment posture, where appropriate. (Please see the Investment Strategy section of this letter for more information about portfolio rebalancing.)

The U.S. stock market performed well in the third quarter, adding to strong gains from the first half of the year (see Exhibit 2). The rally was broad based, with all major market capitalization and style segments generating positive returns. 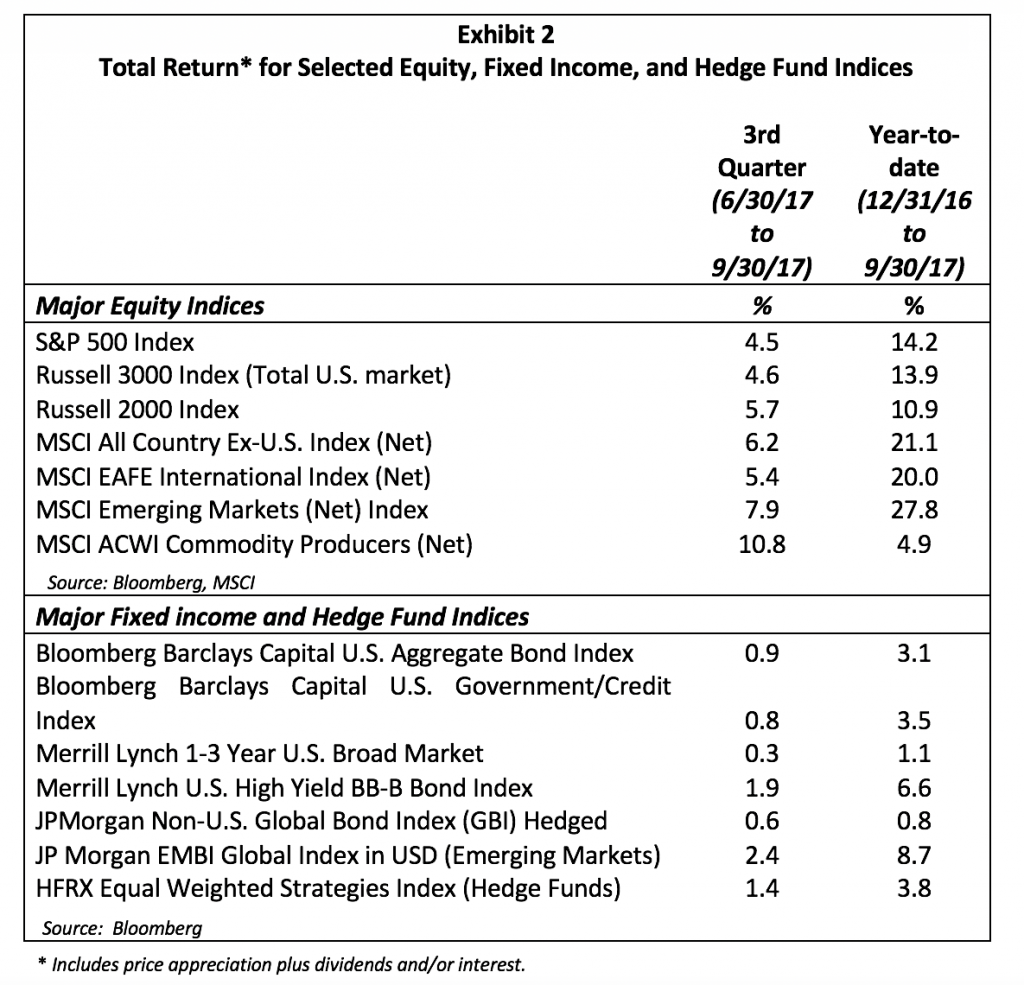 On a comparative basis, the small-cap Russell 2000 Index outperformed the large-cap S&P 500 Index for the first time this year, largely driven by optimism about the possibility of tax reform. Republican lawmakers introduced a proposal to reduce corporate tax rates, a change that would disproportionately benefit small companies as they typically pay higher effective tax rates than large multinational companies.

U.S. growth stocks outperformed value stocks across the market capitalization spectrum, continuing a trend that has been in place throughout the year. Technology was the best-performing sector in the S&P 500 Index, and energy and materials fared particularly well, supported by a resurgence in commodity prices. In contrast, defensive sectors of the market, such as real estate and utilities, generated some of the weakest returns.

Speculation about the timing of the next interest rate increase from the Federal Reserve dominated the U.S. Treasury market during the quarter. Yields on Treasury securities generally declined from July through August, as it seemed less likely that the Fed would hike rates again in 2017. However, yields began to climb in September as oil prices rose along with inflation expectations. The central bank held monetary policy steady at its September and October meetings, but signaled that it would likely increase rates in December. In October, the Fed also began reducing the Treasury and mortgage-backed securities it has accumulated on its balance sheet after three rounds of “Quantitative Easing.”

As was the case for global equities, emerging markets led the broad gains in global fixed income, bolstered by improving macroeconomic and corporate fundamentals. U.S. dollar- and local currency- denominated securities, both government and corporate issues, continued to build on the strong returns they had generated earlier in the year. 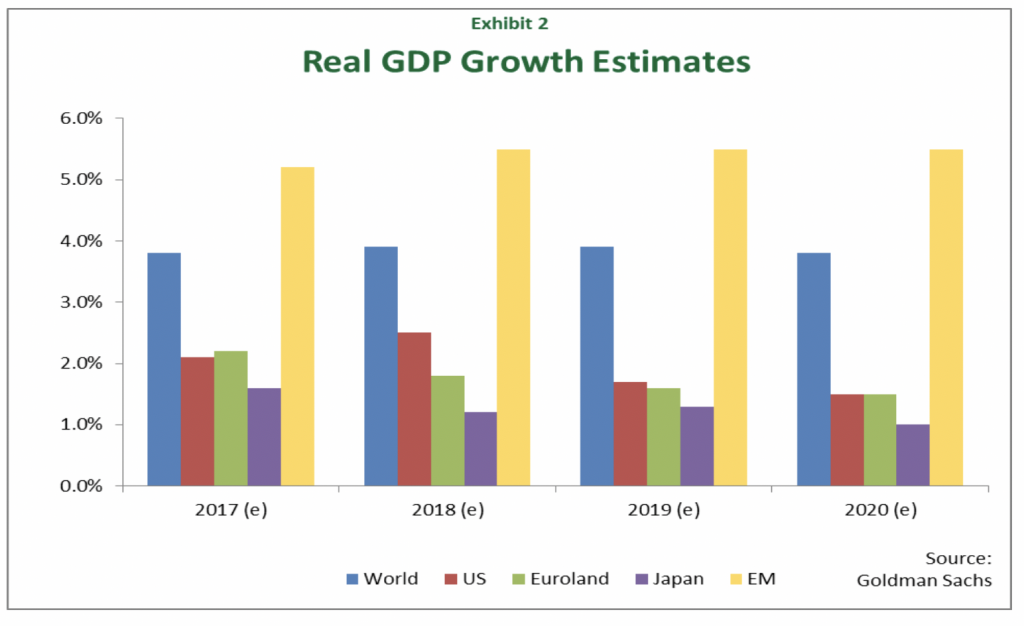 The U.S. economic expansion that began in June 2009 is showing few signs of fatigue. Despite several hurricane landfalls, GDP increased at a 3.0% annual rate in the third quarter, following 3.1% growth in the second quarter. While the economy appears to be in a mature phase of the business cycle, corporate profits remain healthy, and are expected to continue growing (see Appendix A), in part due to the weaker U.S. dollar. The weaker dollar makes U.S. exports more competitive in global markets and increases the profits that domestic companies earn overseas (when translated into dollar terms).

With respect to monetary policy, the Fed will likely continue raising short-term interest rates and reducing its balance sheet over the remainder of this year and into 2018. However, changes in the composition of the Federal Open Market Committee (FOMC) could lead to a shift in policy direction and priorities. The Trump administration recently nominated current FOMC member Jerome Powell to replace Janet Yellen as chair, and there are still three vacancies that need to be filled. Meanwhile, there has been minimal progress on Trump’s policy agenda, although lawmakers are hoping to pass tax reform in the near future. Given tight conditions in the labor market (see Appendix B) and the lack of significant investment in new plant and equipment, fiscal stimulus could lead to higher rates of inflation, or alternatively be negated by hawkish monetary policy.

Overseas, the eurozone is enjoying a mid-cycle expansion. Growth in the region has surpassed expectations in 2017, and sentiment indicators and business survey data have risen to multi-year highs. In response to the strengthening recovery, the European Central Bank recently announced plans to lower its monthly bond purchases from €60 billion to €30 billion beginning in January. The reduction in stimulus could be problematic for Italy since the country’s financial system remains fragile. Political uncertainty is another concern for Italy, which holds a general election next year, as well as for Spain, where the Catalan region recently pushed for independence.

The low-growth trajectory of the U.K. economy highlights the risks of major political change. In the wake of last year’s “Brexit” vote to leave the European Union, forecasts indicate that U.K. growth will be below that of most other developed countries in 2017 and 2018. British corporations have been reluctant to make capital expenditures, and weakness in the pound has stoked inflation. In early November, the Bank of England raised interest rates for the first time in over a decade to curb price pressures despite subdued economic growth.

While growth in Japan is also expected to be subdued, even a low rate of growth, if sustained, will be an improvement for the economy. Inflation is edging higher, but remains well below the Bank of Japan’s 2% target, and the central bank has pledged to maintain its highly accommodative stance until inflation accelerates. Prime Minister Abe won a strong mandate from voters in a recent election, which he will use to pursue constitutional reforms that would expand the role of the Japanese military. The resulting potential for increased defense spending could provide additional stimulus to the economy.

Many emerging markets are on track for strong GDP growth in 2017, which is expected to increase modestly in 2018. China’s economy is performing well, and the country’s rising demand for imports has played a key role in the global expansion (see Appendix C). Likewise, an increase in global trade has benefited China, although exports represent a smaller percentage of GDP than they have historically. China’s economy should remain stable, but it is unlikely that growth will surprise to the upside due to tighter financial conditions and signs of peak activity in the industrial and property sectors. Furthermore, recent turnover in President Xi Jinping’s ruling committee could impact the country’s growth outlook.

Elsewhere in emerging countries, Mexico’s labor market remains strong, but uncertainty surrounding the NAFTA negotiations and the 2018 election could weigh on growth. India introduced a new goods and services tax on July 1; however, signs of improvement in economic activity have dispelled fears that the tax will have negative long-term effects. After emerging from a deep recession early this year, Brazil’s economy is expected to strengthen significantly in 2018 and inflation has fallen to relatively low levels, allowing the central bank to remain accommodative.

Stock markets around the world have generated outsized gains this year, and valuations are generally at or above long-term averages (see Appendix D). As a result, where appropriate, we are rebalancing portfolios to reduce equity exposure to more closely align client portfolio asset allocations with their long-term strategic targets. As we trim exposure to overvalued assets, we are making a conscious decision to reinvest in more undervalued equities (e.g. small-cap, international, and emerging markets), and/or into fixed income and cash equivalents. In addition, we expect mutual fund distributions to be higher than normal this year, and we will be using the majority of these distributions to further rebalance portfolios.

Fixed income appears more fully valued than equities given the continuing low interest rate environment. That said, and as mentioned above, as part of the rebalancing process, we are slightly increasing exposure to fixed income, where appropriate, to moderate overall portfolio volatility and provide for liquidity needs. In doing so, we are emphasizing areas of the market that are less sensitive to changes in interest rates, such as shorter-duration bond funds, and using unconstrained fixed income strategies that have more flexibility.

As we enter the final months of the year, the global economy is performing well. Several major economies are in the early-to-mid stages of the business cycle, including China, Japan, Brazil, and the eurozone. The United States is in a later phase of the cycle, and appears on track for continued steady growth. The synchronized global expansion is creating a favorable backdrop for corporate earnings, which are expected to increase rapidly over the coming quarters.

Although economic and corporate fundamentals remain attractive, we believe, to a large extent, they are already reflected in asset prices. Full valuations in many areas of the market, combined with diminishing global liquidity, could limit investment returns in the months ahead. We also see the potential for volatility to rise from unusually low levels due to any number of factors, including central bank tightening, deteriorating relations with North Korea, and the failure of U.S. lawmakers to pass meaningful tax reform.

In this environment, we continue to thoughtfully rebalance portfolios to ensure they remain aligned with strategic asset allocations. As we rebalance, we are maintaining broad diversification by asset class, geographic market, asset size, and investment style because we believe this will better protect against market volatility as well as help achieve your long-term investment goals.

Please call us at +1 (301) 881-3727 with any questions or concerns about your portfolio. Thank you for the opportunity to manage your assets.